Unexpected change of plans – A wedding instead of Tokyo! The year 2020 was unpredictable for trophy kayaker Milica Starović, so instead of going to Tokyo for the Olympic Games, she got engaged and married her colleague, Antun Novaković, a kayaker from Croatia. Before the new cycle of competition, while filming an advertisement of Vojvođanska […]

Unexpected change of plans – A wedding instead of Tokyo!

The year 2020 was unpredictable for trophy kayaker Milica Starović, so instead of going to Tokyo for the Olympic Games, she got engaged and married her colleague, Antun Novaković, a kayaker from Croatia. Before the new cycle of competition, while filming an advertisement of Vojvođanska banka at Ada Ciganlija, she pointed out that every race was important to her, and that she would especially remember the victory from the European Olympic Games in Baku, which she considers a turning point in her career and an impulse that inspired her. 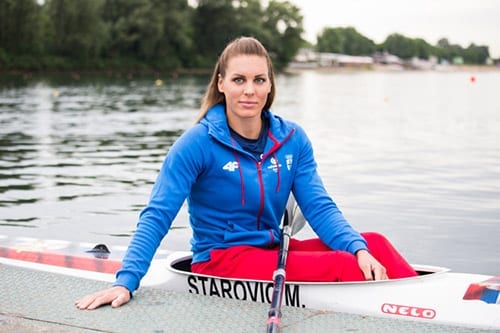 My feelings were mixed. Of course, it was difficult for me at first and I wanted them to take place at all costs. It was a specific situation, because at that time we were still in Turkey for preparations, where we extended our stay. The Olympic Committee told us to stay and prepare as long as we could because the virus had not yet arrived there at that time. The situation was calm, however when they informed us that the Games would surely be postponed for a year, the same day they also informed us that our Government was sending the last plane for citizens to return home. Everything went wrong, but we quickly came to terms with the situation in one day. It was not so hard for us because we are all in the same situation. Our competition has the same conditions as we do, we continued to prepare as if nothing had happened. The Olympic Games are still our main and basic goal..

Your recent engagement and the wedding after caused a lot of nice comments in the entire Balkans. How do you perceive this?

I’m not the kind of person for large celebrations, I’m getting ready for the Tokyo Olympic Games. We were all together, in nature and I was really surprised. It was beautiful. Due to the current situation, the wedding was also organized in a small circle of people. We do not expose ourselves in the media, we use social networks, Antun less often than I do. I liked the media attention, but I was really surprised how much it was covered, even in Slovenia. It is interesting to people, especially the media, particularly when it comes to our nations. I saw the comments were wonderful, thank you all.

Do you prefer kayaking alone or with a partner?

In fact, it is a difficult question. It is very nice to ride a group boat when that boat is going well and when it is well paddled. For example, the races I rowed with Dalma Ružičić – Benedek in the two-seater are invaluable. Three years ago, here at Ada in the foursome, we won a medal at the World Cup that was held in our country. We have someone to share all those emotions with, whether they are good or bad, we are not alone in that. When you’re alone in the boat, it’s good again, in a different way. Especially when one is trained and when that boat, as we say, is gliding on the water. Nothing is ruled out, but for now it’s just me in the kayak. 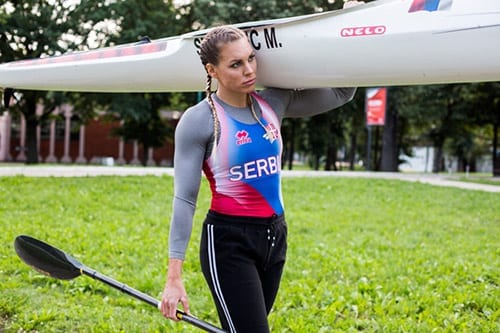 Milica is just one of the athletes to whom Vojvođanska banka, in partnership with the Olympic Committee of Serbia, provides support for optimal training conditions, enables trips to competitions and helps in achieving maximum sports results. Milica says that she supports all her fellow athletes and always supports our country, but that in addition to kayaking, her favourite water sports are those that are cyclical and related to staying in nature.

I follow winter sports like biathlon, cross-country skiing and shooting. It’s very interesting for me to watch, and as much as it sounds otherwise, it’s similar to a kayak. I sympathize a little with them while watching them because of those mental preparations, because one fights a lot with oneself, says Milica, while putting make-up during preparations for the video shooting.

During lockdown and epidemic, besides the fact that there were no official trainings, did you continue to train and what were your main occupations?

After returning from preparations in Turkey, I did not know what had happened to me. I moved into a new apartment that was not furnished and it took me a while to get used to it. I needed half of the time during lockdown to get myself in order, because it was all on me. In fact, I devoted myself most to training because our sport is such that one must not have any kind of losses; neither in terms of training nor in endurance. Although we have time because the season was shifted, we must not fall out from that training process, so I had three training sessions a day. Luckily I was able to use the garage where I installed the kayak ergometer. I think I got the most out from the lockdown. I had time for myself more than usual so I was able to cook and learn something new.

What memories have you of Rio and how do you observe that period and that competition from this time distance?

Rio is a really big lesson and after that I was disappointed. I wanted much more and I know I was worth more than what was presented there as a result. Still, it was a path I had to go through to become stronger and I hope that all these experiences will result in a winning podium at the following Games.

Zoran Ucukalo
Share:
OTP Bank uses "cookies" to provide you a better experience when browsing the website, through improvement and optimization of existing functions and analytics.
Back to top