We will be competitors for the biggest placement at the Olympics next year He is one of the few athletes who had the good fortune to win all possible trophies for which he played during his sports career, but also to become a member of the Hall of Fame after the end. All world media […]

He is one of the few athletes who had the good fortune to win all possible trophies for which he played during his sports career, but also to become a member of the Hall of Fame after the end. All world media wrote about him, and in the history of Serbia and Yugoslavia, he will be remembered as a water polo player who prevented thousands, but never scored a single goal. He played one whole year – as many as 365 games for the national team. In an interview for Vojvođanska banka, Aleksandar Šoštar reveals his predictions of what the sport will look like after the corona virus. He reminds that financial support is extremely important for sports and notes that in the case of the Olympic Committee of Serbia, Vojvođanska banka, which is the sponsor of the fifth Olympic cycle, played a big role in sports successes.

1. In your opinion, will the coronavirus pandemic change professional sports and major competitions?

I think that top sport has already changed. All competitions in the previous period – the final tournament of the Champions League in football, snooker billiards, tennis tournaments, and the Formula 1 race – were held without an audience or with a limited number of spectators. Although the experience when we watch the game on television is very similar, a little weirder because there is no noise in the background, I still think that it is something that cannot be compared. Sport is something that is played with the goal of achieving a top result, but it is also played because of the broad masses, because of the people who are present at the competitions, because of the atmosphere, and that is a completely different kind of experience. How it will be next – I really don’t know. We must be careful, to respect all regulations related to the corona virus, both here in Serbia and at the world level. However, I think it is important to find a solution to create the same kind of interest in sports competitions as it was before. 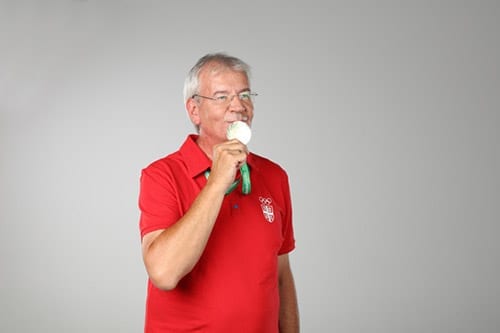 2. Which sports do you think will suffer the most?

The biggest blow will surely be experienced by the sports that are the highest paid and most visited, those that are held on the arena that has the capacity to accommodate the largest number of people. However, I think that all sports will suffer equally, each at its own level. When it is impossible to go to a stadium or a hall, a swimming pool, in some way there will be a loss of interest over time. Then the media will have to be more engaged to interest people in what is happening where they cannot go. If that measure is not found, interest will slowly be lost, that is my fear. For that reason, I think that every sport will suffer equally at its level – if we talk about water polo and football, it is certainly not the same level of interest and representation in the media, but at its level, water polo will suffer enormous damage, just as football will.

3. At this moment, what is the biggest strength and weakness of water polo team in Serbia?

The biggest strength is that we have an extremely high-quality generation. It is a great quality that we currently have and of course the tradition that exists in our country. There are no concerns with this generation. Next year, at the Olympic Games, we will certainly be competitors for the highest possible placement, for one of the medals. What scares me is that I think we don’t have enough centers and I think working with the younger categories is a lot scarcer than it was before. So the base of those quality players is smaller than it was and that is why I am afraid of what will happen after the Olympic Games in Tokyo. The weakness is what awaits us tomorrow – the players go out too early, unformed, the question is whether they will continue the development path they would have here with us.

4. Why is there not much interest of children in water polo?

Water polo is not a cheap sport, only if we look at it in relation to some other sports that are more expensive. In addition, this sport requires constant work and great perseverance, as well as nature in terms of talent. Also, what water polo needs is a better marketing approach that existed ten to fifteen years ago. Now I think that this sport has fallen a lot behind in our country, and it was on a par with basketball, right behind football.

Without company support it would be much harder

“Sport is in a way an extended arm of the state. Of course, there should be a border in the relationship between sports and politics, but when you represent the national team in a competition, in this case the state of Serbia in sports, you have a political role. In part, the state cares about that, but without the support of sponsors, large companies, it would be much harder. Vojvođanska banka has been a sponsor of the Olympic Committee for many years, this cooperation came naturally and enabled a healthy story to be built “, points out Šoštar and notes that Vojvođanska banka thus contributed to the success of athletes from the shadows.

5. Are the media the ones who play sports, bearing in mind that today there are no journalists who follow only water polo?

I agree that the media in some way pull sports, but there is a lot of our merit, work or inaction, focusing on the side we should go and the way we should be presented. Great credit for that decline that occurred in 2008, 2009 belongs to us, that is my opinion.

6. There are prejudices that five countries play water polo – four of them from the former Yugoslavia. Does it diminish its value in that way?

I do not agree with that. For me, these are malicious statements. Every result should be evaluated. Water polo is played everywhere, but there is a difference in quality. If we weren’t good at water polo, if we had some mediocre quality, then it wouldn’t be seen that way. But, since we have quality and win medals because we play in the right way, then they say – well, yes, but others do not deal with it. Incorrect. That is one of the external factors that lowered water polo on the sports ladder. Whichever way I look at water polo, the fact is that it is the first team sport at the Olympics. It can’t be compared to football, but it can be compared to all other sports.

7.What do you consider the greatest success in your sports career?

Gold at the Seoul Olympics is the biggest success of my career. If we only talk about the results – I won everything. Each of those moments has weight in itself, but if we look hierarchically sure that the Olympics are the top of everything. On the other hand, after the end of my sports career, a huge thing for me was when I entered the Hall of Fame. It’s a confirmation of everything I’ve done and how I’ve done it. Maybe in general and the result of how long I lasted – when I was younger I didn’t even think I could play until I was 38 – in 2001 I finished my national team career, and in 2002 I stopped playing. That’s how it went, I was lucky and I had the merit of being in top clubs, which in itself draws a person to deal with it, and that’s why it took so long. When it is difficult for athletes to train and do everything necessary to give the maximum in the competition, then it is best to retire. It took me a long time and maybe that is my biggest success.

Olympic spirit – a mix of dignity, humanity and prestige

Aleksandar Šoštar from the prestigious competition of the Olympic Games, in which he participated several times, carries fond memories, which, in addition to winning medals, mean socializing. His roommates in the Olympic village were Igor Milanović, Dukić, Vasić, with whom he is still in excellent relations today. He characterizes the Olympic spirit as a mix of feelings: dignity, humanity and prestige (in a competitive sense). “The Olympic spirit is very specific, the whole atmosphere in the Olympic village is something that can only be felt there,” says Šoštar. He will never forget winning the first place at the 1988 Olympic Games in Seoul and stepping on the podium. However, he remembers Sydney in 2000, where he won a bronze medal, in a negative context – his team, which was extremely strong at the time, was defeated by the Hungarians in the semifinals of the Olympic Games. He also mentions that he will never forget 1992, when his team was told the night before departure that they could not go to the competition at the Olympic Games in Barcelona.

8. Which professional role is more important and preferred to you, when you are in the pool or by the pool?

Every time is for itself. Sure, it was much better for me while I was in the pool, that’s what everyone will tell you, but one should continue to live. I graduated from the Faculty of Mechanical Engineering, I didn’t even think that I would spend my whole life in sports, it just happened. While I was still playing for Ferencvaros, in 2001 I became the director of Partizan, a year later the president of the Water Polo Association, later in 2004 the president of the Sports Administration, then the assistant minister of sports in 2007, and in 2009 the president of the Sports Association of Serbia. All that time I stayed at Partizan, which is something that is normal in my opinion. Of course, there are successes in this second career, the second age, and I have fond memories of that part – the biggest is winning the Champions Cup with Partizan in 2011 in an impressive way.

9.Are sport and school mutually exclusive or is it possible to be equally committed?

From my experience, I claim it can, but it is subjective. It’s not easy, but it can. The renunciation is much larger. While I was studying, in the mornings I went to training from seven to half past eight, and then directly to college all day. After that, again the pool from seven. During the summer, I carried books to study and studied. I was a straight-a student in elementary school, my favorite subjects were mathematics and physics and that worked best for me, that’s why I enrolled in mechanical engineering. In high school, I received the Miki Petrović Award in mathematics. Because of the math teacher, I wanted to change schools, but my father told me – you can’t run away from problems. Later, I realized that this professor instilled incredible knowledge in us. When a person says there is no time – he goes along the line of least resistance.

10. What would you say to the younger generations?

It is important that they play sports, regardless of the result, whatever the sport. I would like the majority to come to water polo, in the first place because swimming is important for development. Of course, not everyone can become a top athlete, but it will help them in life, because in that way they acquire good habits. While for top results they must be persistent and willing to give up. With great work one can achieve everything.

Zoran Ucukalo
Share:
OTP Bank uses "cookies" to provide you a better experience when browsing the website, through improvement and optimization of existing functions and analytics.
Back to top